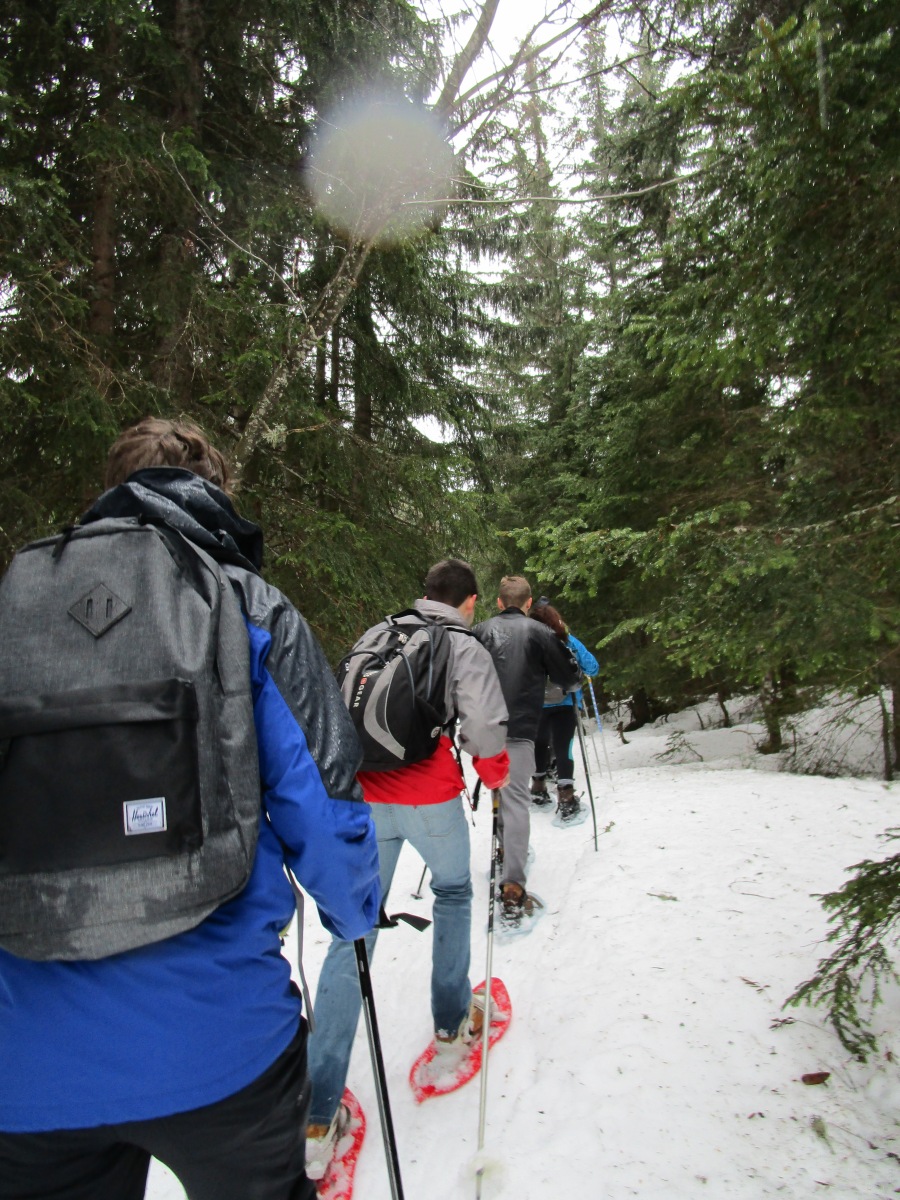 Saturday was our long-awaited snowshoe trek. After a week of Geneva’s sunshine and temperatures in the 60s, we all wondered how much snow would actually be involved in this day-trip, but we were excited to find out.

Shortly after 09:00 on Saturday, 37 of my classmates and I departed by bus to Plateau des Glières in France where the trek would take place. After holding back carsickness as the bus driver maneuvered through the twisting, hairpinning roads of the French Alps, we arrived and were met by our guides. Up in the mountains, it was 30 degrees and drizzling an uncomfortable combination of snow and rain. And, sure enough, there was a swath of pure, glistening snow before us.

We were split into four groups of nine or ten based on our French ability (the guides all turned out to speak excellent English so it didn’t really matter) and were shown how to attach the raquettes to our snow boots. I wasn’t sure what to expect from walking in snowshoes. The raquettes are hinged only at the your toes so that the deck drags behind you on the snow as you step forward. We were given ski poles to help us balance, and then we were off! With hoods drawn, gloves donned, and snowshoes securely fastened, my group departed first.

I was surprised at how quickly we all were able to get accustomed to walking in the light-yet-unwieldy raquettes. Yes, most of us fell at least once, but snowshoeing across a flat expanse of snow turned out to be not so different from walking through a few inches on the sidewalk in boots.

We hiked for about 2.5 hours until we breaked for lunch. Our guide, Bertrand, led us through seemingly random paths, usually following the cross-country ski lanes that criss-crossed the Plateau, but also occasionally just diving into a grove of pine trees. He seemed to know exactly where he was going, even though the paths we followed weren’t marked at all and we had to bat away branches as we went. The landscape was sublime, a real winter wonderland. 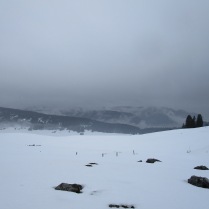 Bertrand was obviously more comfortable communicating in French, but François, our other guide bringing up the rear and making sure no one was left behind, happily translated. We were able to understand Bertrand’s mix of English and French well enough, though. He was eager to tell us about the history of the region, especially its involvement in World War II.

About 30 minutes from the restaurant where we would meet up with the rest of the group for lunch, Bertrand led us to an old barn where we took a brief water break and savored a momentary respite from the persistent drizzle. We nibbled on the snacks we had brought from home while Bertrand and François passed around small cups of a delicious tea for us to try.

By the time we reached the restaurant, Notre Dame des Neiges, we were all soaked and had un faim de loup (a French idiom Bertrand taught us: it literally translates to “hunger of a wolf”). The drizzle had been persistent all morning and our backpacks were soaked through. My rain jacket had kept me (mostly) dry but others in my group hadn’t been so fortunate. My fingers and toes were starting to numb, despite my gloves and waterproof boots. Our socks had all suffered after trudging down hills and getting snow kicked into our shoes. Predictably, we were all relieved to arrive at the quaint wooden cabin that meant an imminent warm meal. We left our snowshoes and poles lined up outside and laid our wet layers on the heaters inside to dry.

The BU staff had warned us of a two-hour meal, and that’s exactly what we got. It started with jugs of water and a tea-like berry juice, along with platters of charcuterie and baskets of bread. The main course was tartiflette, a traditional French dish made of potatoes baked in cheese and cream. It was deliciously gooey, warm, and savory—perfect comfort food after a morning of snowshoeing.

Next, we were brought small balls of fried potato hash; they reminded me of spherical latkes and had a quality reminiscent of crab rangoon. These nuggets were also warm and hearty, but not as flavorful as the tartiflette. After that, we were presented with a platter of local cheese: a soft cheese similar to Brie and two types of Tomme de Savoie.

A photo of our deep-fried potato balls (left) and charcuterie plate (right), courtesy of alteralpatourisme.com.

A poorly-lit photo of our cheese platter, courtesy of me.

Finally, it was time for dessert. We were given four options: an apple and rhubarb tart, a blueberry tart, a French dessert called œufs à la neige (“eggs in the snow”, very similar to île flottante), or caramel flan. Despite its complete lack of French-ness, I chose the flan; Dan let me have his œufs à la neige, which was also quite delicious. We all finished our meal with a hot beverage of choice (coffee for me, naturally). 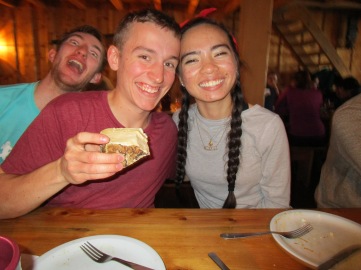 After lunch, we only had an hour walk to get back to the bus. This time, we travelled in one large pack. After walking for a few minutes, the guide leading the way brought us to the top of a steep, snow-covered hill and told us simply that we needed to get to the bottom.

Now, the “best” way to descend hills in snowshoes is to run with your weight on your heels, almost like running down a sand dune. But for newbies like us, that was obviously intimidating. After a minute of staring incredulously, we all began our descent: some of us ran down, others rolled, others sat down on the snow and slid down on our butts, still others flopped belly-down and tobogganed. We arrived at the foot of the hill a few at a time. The first to reach the bottom encouraged their still-descending comrades by pelting them with snowballs. The snowball fight continued for the rest of the walk back to the bus.

Watching us as we tackled each other in the snow and somersaulted down a hill, many people probably wouldn’t have guessed that we’re all college-aged young adults. But it didn’t matter. The cold and the rain were momentarily forgotten as we reverted back to our childish ways of simply having fun.

Once at the bus, we shed our raquettes, thanked our guides, and tried our best to get comfortable in our seats as we maneuvered around our soaking clothes. The full damage of the rain was revealed: my passport was warped, the book I had brought for reading on the bus was soaked and torn, and the left earbud of my earphones was no longer working.

Still, despite the cold and discomfort, the trip was entirely worth it. Everything was wonderful: the scenery, the food, the snow, the new experience, the workout! I’m so happy I got to have this adventure.

Advice for your own snowshoe trek!

If you do get the opportunity to go on a snowshoe hike one day, I highly recommend you do it. Some things I learned from my own experience:

Dress appropriately. Layer up and wear waterproof boots! Most of the following tips really hinge on this tip, so be sure to…

Check the weather. Judging by the pictures from last year’s expedition (and the weather in Geneva for the week leading up), I was fully intending to wear leggings, a T-shirt, and a sweatshirt. Fortunately, we checked the weather on Saturday morning and learned that it was supposed to be 30 degrees with a high chance of precipitation. So I added a rain jacket and gloves to my outfit—and I’m so glad I did. At first, the gloves seemed unnecessary, but by the end I was relieved to have something protecting my fingers from the cold and rain. And the rain jacket’s waterproof-ness and hood kept my hair and torso dry.

Get ready to roll. I only wore one layer of pants, which I ended up regretting. My fleece-lined leggings, while warm, were not suitable for protecting my legs from the snow. Because of this, I opted for slowly walking down the steep hills instead of the much more thrilling method of tobogganing. Wearing my waterproof hiking pants over the leggings would have definitely better-protected my legs from moisture and allowed me to fully enjoy the snow. (Then again, lack of proper snow gear didn’t stop a lot of us from diving in.)

Bring a backpack. Admittedly, my backpack caused a bit of strain on my shoulders after an hour or so of walking, but it was worth it for transport my water bottle and snacks. It was also useful for carrying any unworn layers. (But if it’s raining, be sure to protect your belongings inside!)

We unwound back at home with warm showers and homemade chili. All in all, it was a wonderful day, worth every chilled extremity and broken earbud.

An astrophysicist trying to survive Switzerland without Flamin' Hot Cheetos.